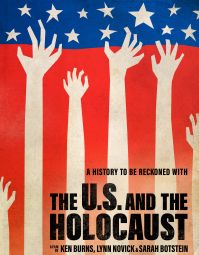 The U.S. and the Holocaust: Screening and Discussion

Discussions will focus on lessons learned and how, only united can we eliminate hate and violence from society. Facilitated small-group discussion followed by report-outs will provide a framework for attendees to glean lessons from different parts of the documentary and how those lessons can be applied to fight hate here and now. Light refreshments will be provided.

Attendees are encouraged to watch the entire 3-part documentary in advance of the discussion, which will air on local PBS Station KQED at 9 p.m. on January 6, 13, and 20 and also will be available to stream on the PBS website now through February 3rd. At the event, we will watch a 40-minute screener from the series provided by PBS Books, who is supporting programming around the documentary for Libraries nation-wide.

ABOUT THE SERIES:
THE U.S. AND THE HOLOCAUST, a three-part documentary directed and produced by Ken Burns, Lynn Novick and Sarah Botstein, explores America’s response to one of the greatest humanitarian crises in history.

Inspired in part by the United States Holocaust Memorial Museum’s “Americans and the Holocaust” exhibition and supported by its historical resources, the film examines the rise of Hitler and Nazism in Germany in the context of global antisemitism and racism, the eugenics movement in the United States and race laws in the American south. The series, written by Geoffrey Ward, sheds light on what the U.S. government and American people knew and did as the catastrophe unfolded in Europe.

Combining the first-person accounts of Holocaust witnesses and survivors and interviews with leading historians and writers, THE U.S. AND THE HOLOCAUST dispels competing myths that Americans either were ignorant of the unspeakable persecution that Jews and other targeted minorities faced in Europe or that they looked on with callous indifference. The film tackles a range of questions that remain essential to our society today, including how racism influences policies related to immigration and refugees as well as how governments and people respond to the rise of authoritarian states that manipulate history and facts to consolidate power.